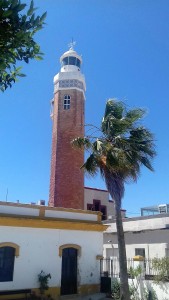 … the lighthouse or faro at Bonanza in Andalucia, to be precise, not Virginia Woolf’s Hebrides set novel of 1927.  The fishing village of Bonanza is on the estuary of the Rio Guadalquivir as it reaches the Atlantic, just north of the Bahia de Cadiz. The derivation of its name is from the Spanish (and Latin) for calm sea, or tranquil waters, though it has come to mean a windfall, or unexpected piece of good fortune. It was our good fortune to be there last Sunday.

I doubt Ms Woolf ever visited, though the place itself is small and charming, with one main street running parallel with the river, houses backing onto a deep sandy beach. Bonanza does feature elsewhere in literature, however, in The Confusion, the second in Neil Stephenson’s rip-roaring and erudite Baroque Cycle (2005) as the location for an audacious piece of thievery. There are no grand mansions to be found there now, though fishing boats bob on the swell and there is, at the Alguida end of town, a port area with docks and factories. There are, unsurprisingly, good places to eat fish, which was what we were there for.

Beyond Bonanza is farmland, now often given over to poly-tunnels,

interspersed with houses whose architects certainly had exuberance and imagination, though they didn’t tend towards understatement (the Baroque featured here too, though attached to flat-roofed bungalows). If you continue along the single road you eventually gain access to that portion of the Donana National Park which lies on the south eastern side of the Guadalquivir.  Here there are wonderfully tranquil forests of Iberian pines and a lagoon, complete with bird watching hides.  The flamingos were displaying and we saw not one other human being.

Or maybe head back to Sanlucar de Barrameda, of which I have written before ( see Contrasts ) the rather larger port and holiday town. Both Columbus and Magellan set sail from here, their voyages being recorded in sculpture and tile work around the town. The former completed his first circumnavigation of the globe from Sanlucar, while the latter returned to his own discovery of Hispaniola. The town is intensely proud of its hugely influential maritime history. On Sunday afternoons the Plaza de Cabildo is the place to be and be seen, amongst the bougainvillea entwined palms, as the inhabitants drink manzanilla or eat ice cream at the square’s two competing ice cream parlours.

of the Barrio Alto, with its two museums and excellent views over the Barrio Bajo or take tea in the gardens of the 13th century Palacio de Medina Sidonia, now a hotel/hostel, for similar views.  There’s an interesting monument between the two, indicative of today’s desire among many Spaniards for the truth to be told about what happened during the Fascist era and commemorating just some of those killed or ‘disappeared’ during that time for opposing Franco. The Duchess who owned the aforementioned Palacio was one of those who was imprisoned, although she was, presumably, too eminent to do away with quietly.

If you’re in this part of the world Sanlucar and Bonanza are worth visiting – we will do so again.

This site uses Akismet to reduce spam. Learn how your comment data is processed.